We have a nice pudding for this week.

This may not be as simple as other meals listed here, but it can be nice to make when you do have the free time. This wont be your average breakfast, but its always nice to treat ourselves!

3. For the topping, take out 1/2 cup of oat mixture and transfer to a small bowl, then cut in coconut oil until combined and resembling an apple crumble crust.

4. Stir apples into large bowl of oat mixture (not crumble topping), followed by milk and vanilla.

5. Grease an 8×8-inch or medium casserole dish with a bit of additional coconut oil, then carefully transfer oat and apple mixture to dish. Crumble over topping and bake for 30 to 40 minutes, until dry to the touch and beginning to brown on top. Serve warm.

This recipe is from: Allison Day 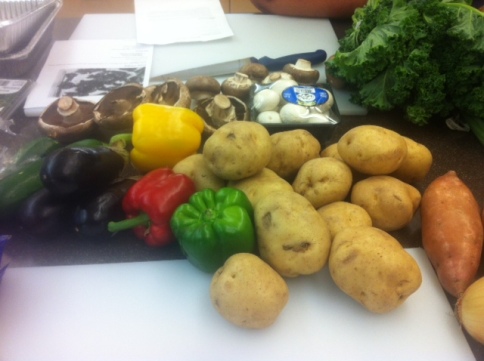 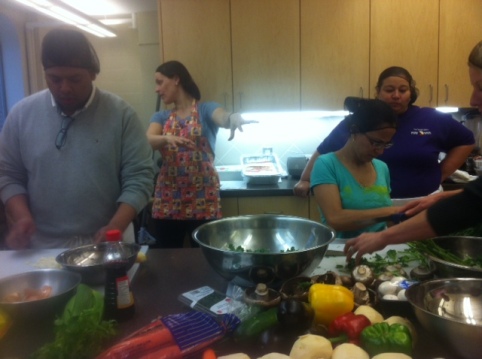 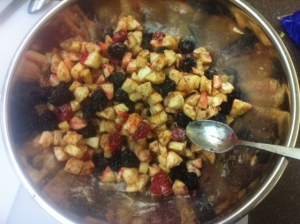 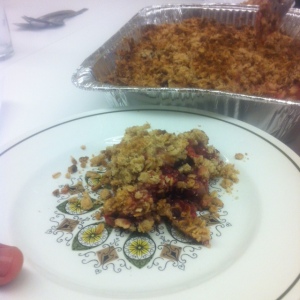 Preparation and Serving:
– Before consuming/using, wash your apples thoroughly to remove any pesticides or surface soil/dust
– When slicing or cubing, trim off top with a paring knife and cut apple in half. Cut out seeds/pulp with knife and then slice or cube into desired pieces
– A vegetable peeler, swivel peeler or paring knife can be used to peel an apple. For best results, start at the top of the apple and circle down the circumference
– The apple core can be removed easily by halving or quartering the apple and then using a paring knife to cut out the core
– Apples can be eaten raw, baked, candied, boiled or used to make cakes, pies, muffins, salads, jellies, jams, sauces, butters, juices, vinegar, apple cider beverages and many more

Directions:
1. Preheat oven to 350
2. Toss veggies and apples with the melted butter (or dairy-free substitute) and maple syrup and spread into a 9″ round baking dish
3. Sprinkle with coconut flour, sage and cinnamon.
4. Bake for 45 minute to an hour, or until casserole is tender, stirring halfway through cooking time.
5. Let cool and enjoy!

Selection and Storage:
– When selecting apples, choose firm apples that are bright in colour, the firmer an apple is the crunchier it will be
– Test the apple for soft spots and look for discoloration
– Apples that have pressure marks/bruises on the skin will likely have a mottled pulp underneath
– Fresh apples can be stored in the fridge for 2 to 3 weeks or at room temperature for up to 2 to 3 days
– Do not store apples next to fruits such as bananas or peaches as the ethylene produced by such fruits can cause each other to ripen or spoil more quickly

Health:
– Apples contain a large number of anti-oxidants and phytonutrients, which contribute towards optimal development and overall health
– Apples contain a significant amount of dietary fibre, which can help prevent the absorption of bad cholesterol
– A medium sized apple provides approximately 14% of a person’s daily Vitamin C requirements

Directions:
1. Pick the crab apples. Crab apples aren’t normally available commercially, so you’ll probably have to find a crab apple tree and pick them yourself. However, don’t hesitate to try a local farmer’s market as someone might be selling them or can get some for you.
2. Wash the crab apples. Remove the stalks and cut off the bottom and any bad parts.
3. Put the crab apples in a saucepan and cover with water. Bring to a boil and simmer for approximately half an hour.
4. Strain the pulp. Crab apple jelly is normally strained through muslin or cheesecloth, which results in a clear jelly, but if you don’t have any and don’t mind the jelly being cloudy, you can use a fine sieve. If straining through muslin/cheesecloth you will need to leave the pulp to strain in its own time (if in doubt, leave it overnight), as squeezing it to speed up the process will result in a cloudy jelly.
5. Measure the juice and add the sugar. You will need approximately 7 parts sugar to 10 parts juice.
6. Squeeze the lemon and add to the juice and sugar.
7. Boil the jelly. Skim off any white froth that forms on the surface – this is the stuff that makes the jelly cloudy – so the more you can get rid of, the clearer your jelly will be. Once the jelly starts to thicken, test it every couple of minutes on the back of a cold spoon. If it sets, it’s ready. If you have a thermometer, the jelly should set at around 105ºC
8. Pour into sterilised jars and seal. Tightly seal while still slightly warm. Store in a cool, dark and dry place.

– The Ontario Greenbelt produces more than a quarter of the province’s apples (26.57%)
– Over 20 varieties of apple are grown in Ontario, but the most common are McIntosh, Empire and Red Delicious
– Ontario apples are generally available throughout the fall and winter, though there are some varieties that are available into the spring and early summer
– McIntosh apples are available mid-September until May, and Empire and Red Delicious are available from October to July
– Ontario apples are available at local farmer’s markets (like the Good Food Market!) and in grocery stores (can be identified by the Foodland Ontario label/sticker)
– Crispin (October to April) and McIntosh apples can be used for baking and are generally all-purpose
– Spartan apples (October – April) are great for making sauce or pie filling
– Gala (early September – February) and Fuji (mid-late October – early February) are good for use in salads

Directions:
1. Heat the oven to 350°F and arrange a rack in the middle. Lightly coat an 8-by-8-inch baking dish with butter.
2. Combine the apples, granulated sugar, cinnamon, and 1/8 teaspoon of the salt in a large bowl and toss to coat. Place the apple mixture in the prepared baking dish and set aside.
3. Using the same bowl as for mixing the apples, mix together the brown sugar, oats, flour, and remaining 1/8 teaspoon salt until evenly combined. With your fingertips, blend in the butter pieces until small clumps form and the butter is well incorporated, about 2 minutes.
4. Sprinkle the topping evenly over the apples and bake until crispy and the apples are tender, about 50 to 60 minutes. Let cool on a rack at least 30 minutes before serving.

– The apple is a sweet, crunchy fruit that grows in many different colours (red, green, yellow, pink, russet or even bi- and tri-coloured) and varieties
– More than 7500 apple cultivars exist around the world!
– The primary ancestor of today’s domesticated apple originated in Central Asia
– Apples and apple seeds from Europe were brought to North America by colonisers in the 1600s
– Crab apples grew in North America prior to colonisation and are still used in Indigenous foods such as jellies
– Apples are ready to be harvested by late summer and into the fall season
– Apples come in a wide variety of sizes, but commercial growers today generally aim to produce fruit that are 7.0 – 8.3 cm in diameter
– Cultivated apple trees grow to stand between 6 – 15 feet tall because they are grafted to a dwarfing rootstock
– Wild apple trees can grow as tall as 39 feet
– Commercial apples are propagated through grafting rather than from seed
– Apple trees grown from seed would likely produce an apple too sour to be eaten raw, but which could still be used in cooking
– Apples can be bred for a variety of purposes based taste and usage, such as eating raw, cooking, producing apple cider or fermented to produce alcoholic cider
– Large scale commercial apple industry began in Washington State during 1900s following land irrigation projects
– The shores of Lakes Ontario, Erie, Huron and the Georgian Bay are Ontario’s hotspots for apple production
– 10% of Ontario’s apples are exported while the rest are sold in Ontario as fresh apples or processing for juice, apple sauce etc.
– Three quarters of Ontario fresh apple production is distributed through grocery stores and the rest through farmer’s markets, roadside stands and pick-your-own operations
– The number of imported apples distributed in Ontario grocery stores has increased significantly over the last decade
– Today, China, the United States and Turkey are the top three apple producers in the world

Directions:
1. Preheat the oven to 350°.
2. Grease a 12-cup muffin pan.
3. In a large mixing bowl, combine the oats, sugar, baking powder, salt, and cinnamon.
4. In a second mixing bowl, whisk together the applesauce, yogurt, milk, oil, vanilla, and eggs.
5. Pour the wet ingredients onto the dry, and add the apples.
6. Fold gently to combine.
7. Spoon the mixture into the prepared muffin pan.
8. Bake for 25 minutes or until golden.
9. To freeze, store the baked and cooled cakes in an airtight container in the freezer. Thaw completely overnight and reheat in the microwave or hot oven.

Thank you for all of your support!
If you are in Toronto, come visit the Good Food Market on January 15th between 11:45AM and 3:00PM at 200 King St. E in the main lobby. We have affordable and quality fruits and veggies to purchase!
In the meantime, in case you forgot to make dessert for Christmas dinner… 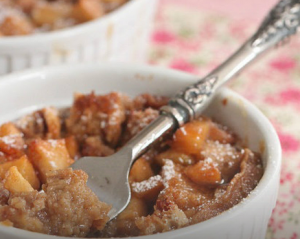 Directions:
1. Preheat oven to 350 degrees F. and lightly spray four 2 cup ramekins with non stick cooking spray.
2. Cube bread into 1/2 inch pieces and divide evenly between ramekins.
3. Place eggs, cream, brown sugar, cinnamon and vanilla into a large bowl, whisk to combine.
4. Place butter into a medium skillet over medium heat.
5. Saute apples for 1 minute then add brown sugar and cinnamon.
6. Cook and stir for another minute.
7. Transfer apples and drippings into cream mixture then divide between ramekins over bread.
8. Top with 1 tablespoon brown sugar on top then bake for 30-35 minutes, until puffed and cooked through.
9. Remove and dust with powdered sugar and drizzle with just a touch of pure maple syrup if desired.
10. Enjoy!

Fruit/Veggie of the Week